This post is sponsored by British Soccer Camp and US Family Guide.  I was given a week at camp to facilitate the review.  No monetary compensation was given.  All opinions belong to Penny Pincher Jenny. 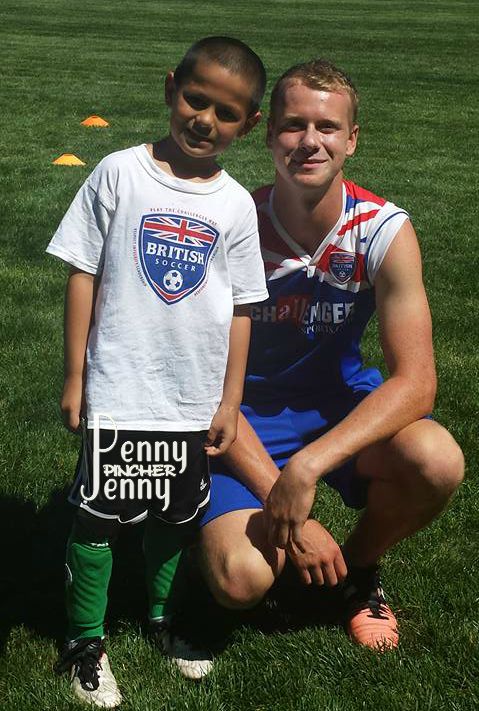 You may remember my post earlier this year about British Soccer camps summer camps and their free water bottle promotion.  (if not you can see it here) Well this week Michael completed his camp this week from British Soccer camps, and he had a blast the whole week!  We choose to do the morning camp since it has bene so hot in the morning and Michael had a blast working on fine tuning some of his basic soccer camp.   We had no idea what we were in for as he had never done a soccer camp like this.

This was Michael’s first camp ever he was so excited that he was being dropped off and left there with the soccer coaches from England and to see what was in store for the week.   I could tell he was a bit nervous but they welcomed him and camp started right on time. The kids received their free ball and t-shirt on the first day that was included with the registration!!!  Even though Michael has become fairly advanced in his soccer skillls we knew he needed a back to basics type of thign to help him continue to advacne his soccer skill set.  Now as important as my opinion is I really think what Michael thought of the British soccer camp would mean a lot more then anything I as mom would have to say.

I thought it was totally awesome, I really want to go and do another one.  I love that Coach Jack had us scrimmage so much and I was on Team England for the world cup!! We were judged on leadership, sportsman ship, and creativity of our games for which country would win the world cup.   Team Brazil for my camp won and they deserved it.   We also did daily MVP for the teams.   The best part was seeing who the World Cup!!

My favorite part as mom was that they also stressed the importance of sportsman ship as a team, as a player, and towards your coach.  The kids were also taught what the word respect means and how to show it to your coaches and your teammates.   Every day at Camp had a theme for the kids, wacky day, fact day, flag day, and dress the coach day.  The awards ceremony for the kids was really nice too! Michael received a card with a a note from Coach Jack and also a scoring what Coach Jack thought of his soccer skills and some notes for him as well.