I was sent a costume in exchange for myhonest reviw.   Regardless all opinion are mine and facutal to my experience with the product.

As many of you may know my four-year-old Michael is OBSESSED with super heroes!!! He wears costumes year round for pretend play or to watch cartoons.  NON STOP!!! He would sleep in them if i let him!!! (Thankfully they make super hero pajamas)  We typically are picking up costumes year round and after Halloween markdowns for Michael to wear and the dress up bins.  However they are typically very cheap material and rip super easy!!! 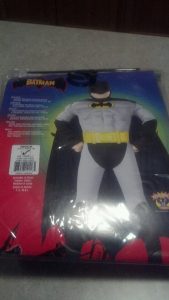 I have been eying costumes online for the kids as I am TIRED of repairing their costumes or the tears when they rip.  I was SO excited when I had the chance to review a Batman costume from Costume Discounters 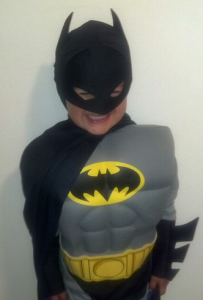 I received one or more of the products mentioned above for free using Tomoson.com. Regardless, I only recommend products or services I use personally and believe will be good for my readers.

The quality is AMAZING!!! After he had taken it off for bed I did the mommy test 🙂 I Pulled on all the seams, tried pulling on the cap, and in general beating it up!! He has worn it so many times since and no damage!!! If you have boughten the costumes in store before you know how fast they are typically destoryed!!!!! 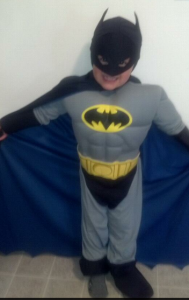 The Batman costume came with the mask, boot covers )so we don’t have to buy separate shoes), a cap, and a removable belt!! As you can tell by the picture he is abosoutely in Batman costume heaven!!! We had ordered The Dark Knight from Amazon last month when it went super cheap and him and dad watched it while he wore his Batman costume!!! My oldest Kylie is now eyeing the Batgirl Costumes for her to wear with him on Halloween!!!

Want to get one of your own? Enter on the Rafflecopter below for you chance to win a Cosutme valued at $35 or less from Costume Discounters.

I received one or more of the products mentioned above for free using Tomoson.com. Regardless, I only recommend products or services I use personally and believe will be good for my readers